Digging for victory since 2006!

September 2021
Indian summer and late nectar flow have resulted in bees 'going for gold'
Nothing is as straightforward! This wild comb on eke will be scraped up
and given back to the bees. 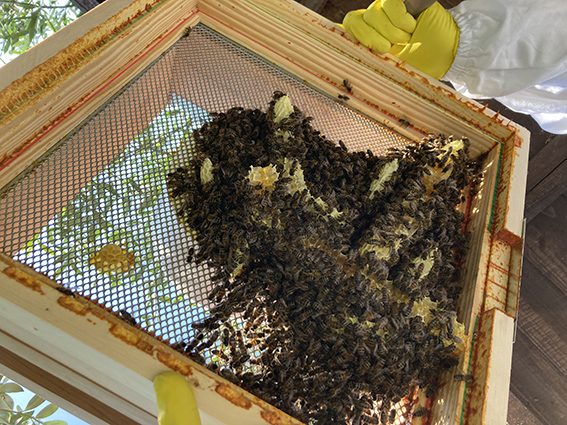 August into September
what a difference one month makes...
bees doing fine, but not much honey, so will need to feed them
to boost winter stores.
Meanwhile, the cucumbers have excelled as have courgettes of course and late French beans
not sure what is going on with sunflower triffids?

N.BEE.
as beekeeping is now on the 'cool' list together with 'wild swimming'... I would like to just point out that the honey bee population
is apparently doing fine in the UK.
The problem for the future may well be finding enough nectar and pollen from flowering plants and particularly those that have
not been sprayed with pesticides, so all those bees on city rooves will be competing for food?

June - Summer? solstice and plants and potatoes in flower,
broad beans and rhubarb good to pick.
onions and sweetcorn coming on well, French beans, courgettes
and cucumbers only just getting going.
Meanwhile in bee corner - due to weather conditions, ie. rain and more rain,
we are feeding a bit of sugar syrup...

June 6th and the bees are IN...
next week's inspection to see if Queen is laying.

Meanwhile, on the plot, after a late start, the French beans are starting to emerge,
and soon we shall be harvesting broadbeans hopefully.
From now on... no more bug sprays so blackfly will have to be controlled by soapy water!

end of May - unseasonal weather changes.
Nuc of bees decided to swarm when the incessant cold rainy weather
turned into summer sun overnight - the minxes!
and I missed the drama, but our bee mentor Isabelle has saved the small colony.
more soon...

will have to trim the olive tree back a bit, the bees are not flying straight out of the hive as anticipated, probably put off by low straggling branches,
but they have weathered the May storms and are happy and thriving .

(january sleep - not our plot)

our gnomes - they have 'been around the world' and back

pomegranates with some tuscan insulation

how long is a french bean?

The shed has been weatherproofed.

Deapite the endless bounty of courgettes that we gave away during August,

we were perplexed and disappointed to receive a standard warning letter,from the town council, in September,

notifying us that our plot appeared 'neglected and uncultivated'!!! You can imagine our response.

AUGUST 2018
hot hot hot.... in fact the hottest summer since those carefree student days of 1976!
Best crop this year are the Franchi seed cornichons, which have turned into very sweet tasting cucumbers

May 2018
late start for plants due to inclement weather! But we are on track now... although pomegranate may be a casualty, we shall see.

AUGUST 2017
the annual picnic was great, despite K disturbing wasp's nest in the bottom of compost bin,
and after multiple stings is on antibiotics!

and thankyou Joana for organic Italian straw which now surrounds our primeval rhubarb...

Our olive trees are thriving - Kent is the New Tuscany dontcha know?
The colours here have NOT been tweeked at all. (small original olive plant bought from Folkestone market can be seen up the page)

Our allotment association has a website too - see here

Archive of photos from our beginnings.....

Paul keeps saying that 'Kent is the new Tuscany'!

this is an olive tree by the way.

don't worry by Easter we shall be up and running again....

here it is as good as new, thanks to Colin and Dave who lent Paul a hand.

- best recipe so far is sliced in chilli tempura batter!

meanwhile, here are some mystery beans - they started off as dwarf beans

but we left them as they were a bit stringy and this is what popped out.

I think they are a sort of 'borlotti' bean and so will try them cooked up.

This started as a courgette but we were away for a few days and came back to this!

the forget-me-nots have died down now and have made way for the lavender.

we have two apple trees, one is a bramley and one is an eating apple - cannot remember what!

there is also an ancient quince tree near the stream.

onions have been spectacular

I am learning to string them up...

Broad beans planted in November have sprouted and should be more resistent to pests - hmm.

Just pruned apple trees- some useful videos on the web to show how to do it!

looking forward to Paul's Easter hols so we can start digging.

Here is a link to IWM clip - it is potato planting season!

Here's Rosie who comes with her owner to the allotment.

She is waiting for me to throw her toy,

and only steps on the paths between plots!

this pot of pansies has been flowering all through the winter and still going...

the only casualties of the ice and snow earlier this year has been the mimosa ( of course it comes from the Med!)

and maybe the buddleia. Rhubarb is excellent.

everything bursting out now - some photos soon....

a querie - loads of tough looking ladybirds are congregating on the shoots and buds of the apple trees,

and leaves are curling in disgust. Not sure what to do, as I previously thought ladybirds were a good thing.

that eat our native ones - she said 'squash 'em!'

first harvest of beautiful lettuce, and onions that had bolted.

a perfect antidote to today's exit from the World Cup

I've just planted a hollyhock plant that has germinated from a 'stolen' seedpod from Darwin's Downe House, (not sure where that is!)

think that is actually comfrey next to the foxglove - good for compost we hear.

broad beans have been excellent this year.

just dug up loads of onions to stop them rotting in the rainfall this week...

cucumber plant frond - they have gone mad in the rain

30 bags of compost and some fine rotavating later - we are ready to go!

The allotment Tsar has installed a water trough at the bottom of our plot - fantastic help!

Our nearby Gurkhas will be delighted as they have a wonderful way of irrigating their plot,

by throwing buckets of water across the crops and repeating this when it has soaked through,

Everything is popping up now.

We have had great broad beans, the artichoke plant has gone mad ( see photo).
NB. globe artichoke plants only last 3 years. Apparently you have to take
runners offand replant in the spring.

Even some raspberries have appeared which have been quickly eaten on the hoof.

Not sure how to thin out carrots which can be seen in this photo.

Our soil is now

looking the business, with bits of grit - it is much easier to weed. I have an African

tool, which I bought online which is truly excellent for weeding, called an 'azada'? (bought from Get Digging)

The courgettes have been good, tomatoes very slow this year, and cucumber plant drowned.

has produced some stocky little 'dwarf' plants ( they don't seem keen to climb up canes so not showy! ),

but with really excellent beans -

digging up potatoes before the slugs get to them

and laying out onions to dry.

Harris loved vegetation of all sorts - a fine lettuce and a fine animal.
Our new pair Lundy and Mardy like nothing better than sport with peas or beans.

the last artichoke of the season

compost has been added and ground rotovated by easter w/e - potatoes chitting.

lots of good stuff now appearing - a bit later than planned due to wet/windy weather!

Here is some lettuce, artichoke on the bonnet of our renault 4, and Paul changing his footwear.

July 2012 onions turned over ready for drying out and maris piper potatoes being harvested before snails and slugs - best crop yet.

allotment chums decided that our onions were 'best in show' this year - which amazed us!

and here are our first beetroots - what a wopper! ( if you want a good borscht recipe, email Karen)

AND OUR FIRST DAY BACK AT THE PLOT - APRIL 8TH ( as you all know it has been a blooming mad season until now ?

rhubarb is the first to appear, broad beans planted in December are growing and the olive bushes survived the inclement frosts and are now unfurling.

we are about a month behind this year due to weather but broad beans are flourishing and should be ready by end of June!

June 2013. Fabulous pair of robins found nesting in flowerpots (centre photo) and on patrol on two posts if you look carefully.

and Paul is resting!

August 2013 - the plant of the year so far is the cucumber - delicious and plentiful,

closely followed by beans and courgettes.

a very jolly time was had at this year's allotment picnic. - many thanks to Lawrence and Anne.

Paul happy with his improvements to the 'Merry Tiller'!

now to find out how to cook it! We've given quite a few away, so waiting to hear what folk have done with them.

We have just tried putting some artichoke seeds in germinating pots under a cloche at home,
shoots just appearing in a few pots - excellent. I bought the packet at Camisa's fab Italian deli
in Old Compton Street, must be good eh?

nearly Easter 2014 and Paul started his holidays from college with the visit to the plot - digging going well.

excited by this activity, I have ordered Maris Pipers from Martins in Cheriton and they have excellent plug

plants later on. The only thing I order outside of our local supplier is Cupidon filet green bean from Real Seed Company- simply the best.

But Real Seed Company have been so inundated with orders that their online shop is shut until March 29th!

PS. ALSO the cucumber seeds were spectacular 2014 ( see below)

Paul has been digging during his Easter break... good boy!

Paul stops for lunch - Easter this w/e and potatoes, onions, beans shallots now in the ground.
Karen uses gurkha technique for breaking up the earth. (sun visor is not stylish I know but it is very practical!)

June -Marigolds self seeding so pleased I didn't think they were weeds. French beans are being nibbled by something this year, but artichokes and broad beans looking good and feeling fine. 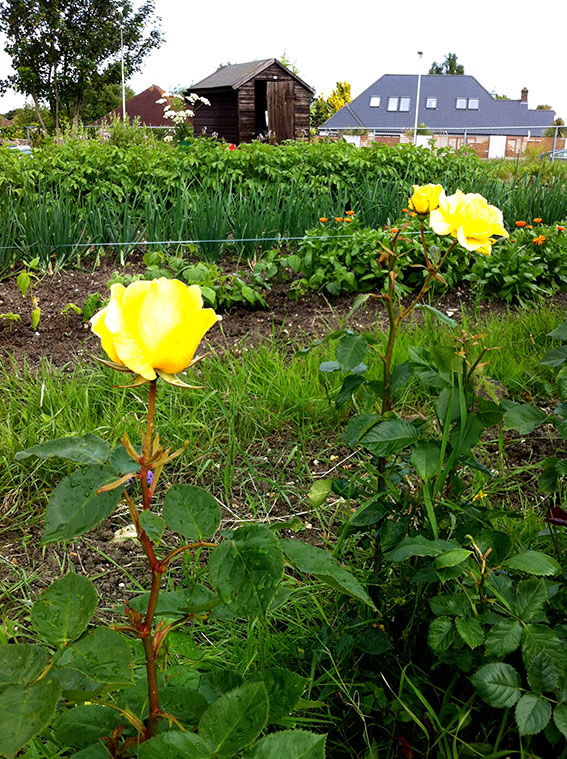 Andy the cockerel and his harem. Spectacular beetle bottle green tail feathers that would grace any military helmet.
What a charmed life thanks to Ann and Laurence.

spectacular crop of cucumbers - now I need an easy pickling recipe. - thanks to Cathy Holliday, I have now pickled for a day!

September 2014
Karen was asked to judge window box competition.
As in 1930s Bermondsey, free boxes were distributed around Folkestone.
The standard was high - hopefully
this can become an annual event.

The self seeded marigolds ran riot and slightly suffocated our onions this year, so they need to be culled next year.

Paul tilling away merrily on the new improved 'merry tiller'. And I love old edging tiles - this is all we have.